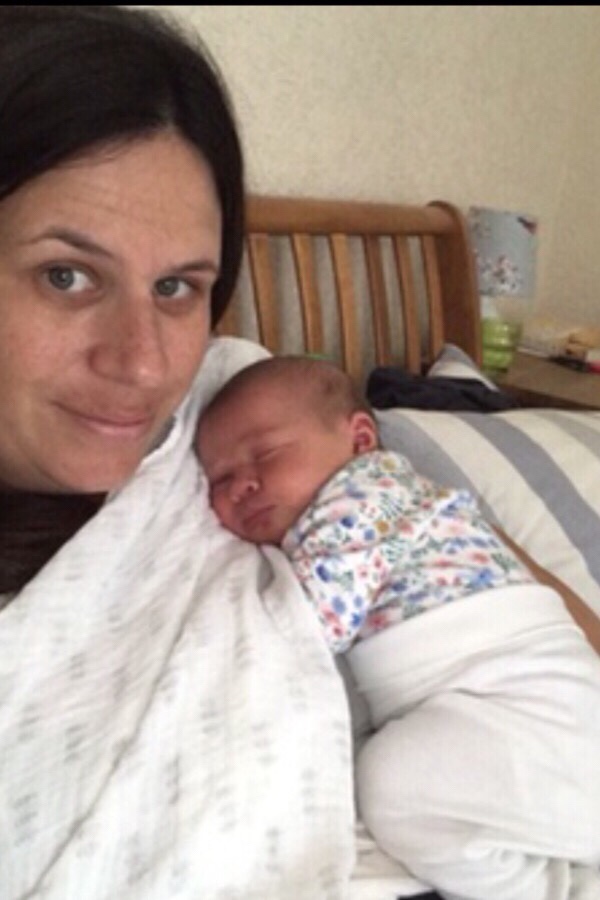 Now I’m feeding my fourth and final baby I’m ready to reflect on my feeding journey. I have breastfed all 4 babies and all 4 babies have been different to feed.

Finlay, our first, hurtled into our lives after an 18 hour labour resulting in a traumatic emergency section. Weighing in over 10lbs he was a big bundle of joy. Not being around many mums or babies I had no clue on what I was doing so I had midwives and nurses put him in various positions and try and push my breasts into him. Finlay was a sleepy baby after such a traumatic birth, the nurses even tried to get colostrum (1st stage of milk) from a syringe into his little mouth. I look back now and I find it all too much for my first days of motherhood. I know they were doing what they think is best but I found it all quite daunting.   Finlay then came home and over a few days dropped close to 10% of his weight and I was strongly encouraged by the midwives to formula feed him to keep up his weight. I then breast and formula fed for 12 weeks, after which I breastfed less and less. I had an older unhelpful relative even ask me why I was struggling to feed as it’s a doddle!  I felt bad that it hadn’t come easy to me, but it really isn’t easy and there are days of cracked, bleeding nipples, engorged painful breasts to deal with alongside recovering from birth and caring for a newborn.

Daisy came along 2 years and 9 months later. This time a planned section which was much more serene in comparison to Finlay. Another large baby, she was however good at attaching to the breast as she latched on straight away! I felt a surge of confidence at this point which was then dented when we got her home. She too lost 10% of her birth weight, I cried tears mixed with hormonal emotions that my milk isn’t up to scratch, and so again the midwives and health visitors strongly advised formula. At this point I worried that she wouldn’t get enough to thrive if I didn’t feed her a bottle. I tried pumping to get my supply up and I just can’t seem to connect with a breast pump and so then I would stress (which doesn’t help the flow) and I would get a few drops of milk. So I would then cry that maybe I don’t have enough milk. My breasts can feel full at times but they dont leak or squirt like others say theirs do, so these were all doubts in my mind at various stages of feeding. After many healthcare home visits I agreed reluctantly to  introduce the formula and once again found it really hard to reduce it or take it away so I combined fed until 9 months. I was really pleased with myself that I had got so far feeding her, but silly as it is (as a fed baby is all that matters) I would still have liked to have tried to exclusively breast feed her.

4 years later Teddy arrived and with two breastfeeding experiences behind me I felt more determined to breastfeed exclusively this time. We came home from the hospital and he was latching well and then came the midwife / health visitor visits and then the drop in weight by 10%. Despite me waving my older Childrens red books at them and showing them that this is my pattern ( Big Baby -csection -weight drop) they again wanted formula and carried on visiting us and monitoring his weight until the 6 week doctors appointment. At this point Dougie was firm with them and supported my wishes to not have them visit our home and that I would touch base with the doctor at 6 weeks. The health visitors weren’t impressed but I couldn’t at these early stages keep having these appointments as they were just knocking the confidence out of me yet again. I monitored his weight myself at the drop in centre clinic. He dropped from 90th centile to under the 50th and remained steady. Teddy cried often for feeding and was generally a bit of a fussier baby than my others so I gave him 1 or 2 top ups of formula here and there thinking maybe they’re right and this is what he needs. As Teddy grew older I realised that he was a bit of a fussier baby and toddler, and that’s just his nature, and that maybe he would have been the same with or without the top ups! I again fed him until 9 months as he became a biter and a vicious pincher!

When I finished feeding Teddy I thought our family was complete and thus my feeding journey had come to an end. Then with a change of heart our lovely bonus baby Florence came in the summer of 2016 and so I had another chance to change my breastfeeding experiences. I spoke with the midwifes and health visitors about my having big babies and the initial weight loss, and following that a change of growth on the centile chart. They assured me they would be understanding and patient.

Florence at first had a bit of a lazy latch in the hospital as she had a bit of a traumatic birth. The consultant had slightly cut her head with a scalpel on entering the world and she needed a little stitch. Once Florence had improved her latch she took to feeding quite well. Each baby I feed the slightly easier those first few weeks of feeding becomes. Then came the scales and her weight loss in exactly the same way. Florence lost just over 10% so they again were concerned. I had a visiting midwife over the bank holidays who insisted in sitting in our home and ringing the paediatrician to check whether a hospital visit was necessary.  Florence was showing no other worrying signs – enough wet/dirty nappies and no signs of dehydration. Dougie was once again frustrated that my confidence was taking a bashing yet again. We reluctantly agreed to formula top ups to keep her weight up. I then asked to be discharged from the home midwife visits. Then came the health visitor who as lovely as she is still made me feel conscious that she was monitoring her weight gain by referring to the issue frequently. On request that home visits stop and I attend the clinic I met with two other health visitors unaware of the issue. They both plotted her on the chart and were happy with her progress. On asking if all was ok, and then me explaining the reasons for checking, they both assured me that she was thriving. They added that although she had initially dropped weight her weight gain was steady, albeit slow, and that a breast fed baby won’t necessarily conform to these government charts! At last two ladies with common sense.  After weeks of giving a very small amount of formula in the evening after a breastfeed, she had been sleeping through from 11pm-5/6am at just four weeks old. Getting used to this sleep for functioning with 4 children we carried this on and this became a crutch I thought I needed with my milk history.  After a few weeks this sleeping pattern changed and she woke up every few hours for a feed and so I started to worry that formula top ups needed to increase and this would be a decline in milk for me and also maybe the bottle is not related to her sleeping through. So I decided to ditch the extra bottle and prove to myself that I can do it. Five months on and Florence has been exclusively breast fed since. She feeds on demand and sometimes goes 4-6 hours without a feed and other times an hour! She has shown no signs of being under nourished as she has plenty of wet nappies and is content in between feeds. She was weaned at 6 months and the extra food has made no difference to her sleeping / feeding pattern. Florence is now 7 months and we are still both enjoying breastfeeding and we have no plans to stop.

Reflecting on all my feeding journeys and many a late night Googling milk supply, taking various herbal teas, oats (Dougie makes amazing porridge!) and trying to rest to boost my milk supply, I feel that there are a few reasons for my bumpy feeding journey. I have large babies and so c-sections that require a great deal of tugging! Our babies come out over inflated and puffy, I have read recently that the drugs used can effect their size so initial weigh in can be misguided and so not a true reflection of their weight. In some countries they don’t weigh the baby until they are several days/ week old. I think this would have been of help in my case. It’s a known fact that sections can mean slow milk supply.  My milk takes a few days longer than the average to come in. Also the charts should be tailored, updated and adapted, I think if I had been left for a few weeks with each baby to see how I got on my feeding journeys would have been a different story. Dougie always believed in me and always tried to go against the box ticking of the charts and centile plotting and go with Mother Nature instead and he (I hate to say) was completely accurate. I also this time around had a knowledgeable friend (mid-training breast feeding counsellor) who always assured me that babies patterns change and demands in milk and growth spurts don’t necessarily mean that she’s starved. So if I can reassure just one Mummy that sometimes you just need to go with your own instincts and support from family and friends. Try and  read / surround yourself with positive material on boosting milk and breast feeding and take the professional healthcare advice, but be led by your own thoughts and try and be firm with them. I am aware that not all community midwife and health visitors are of this mind set, and that there are some willing to have a more flexible and open minded approach, so this post is not to bash these much needed members of the community. It’s also a post not designed to bash formula feeding as I would have been lost without formula with my first born and I realise that breast feeding is not for everyone by choice and / or medically. A fed baby is a happy baby and Mummy! I just wanted to share this experience as a person who has found feeding a challenge and I only now feel confident after feeding four of them. I still even now have the odd doubt when someone comments that my baby is petite or feeding a lot, however I now tell my inner self to stop these thoughts, and politely reply that yes this is normal for some breastfed babies to be more petite and to cluster feed on demand! No two babies are alike, and no two breastfeeding experiences are either, but be confident that as a mother you know what’s best for both you and your baby.

My Top Tips for Settling a Child…

How Is it May already?

The 3 Stages of Living with a…