The Spirit of Santa – The girl who didn’t know whether to believe….! 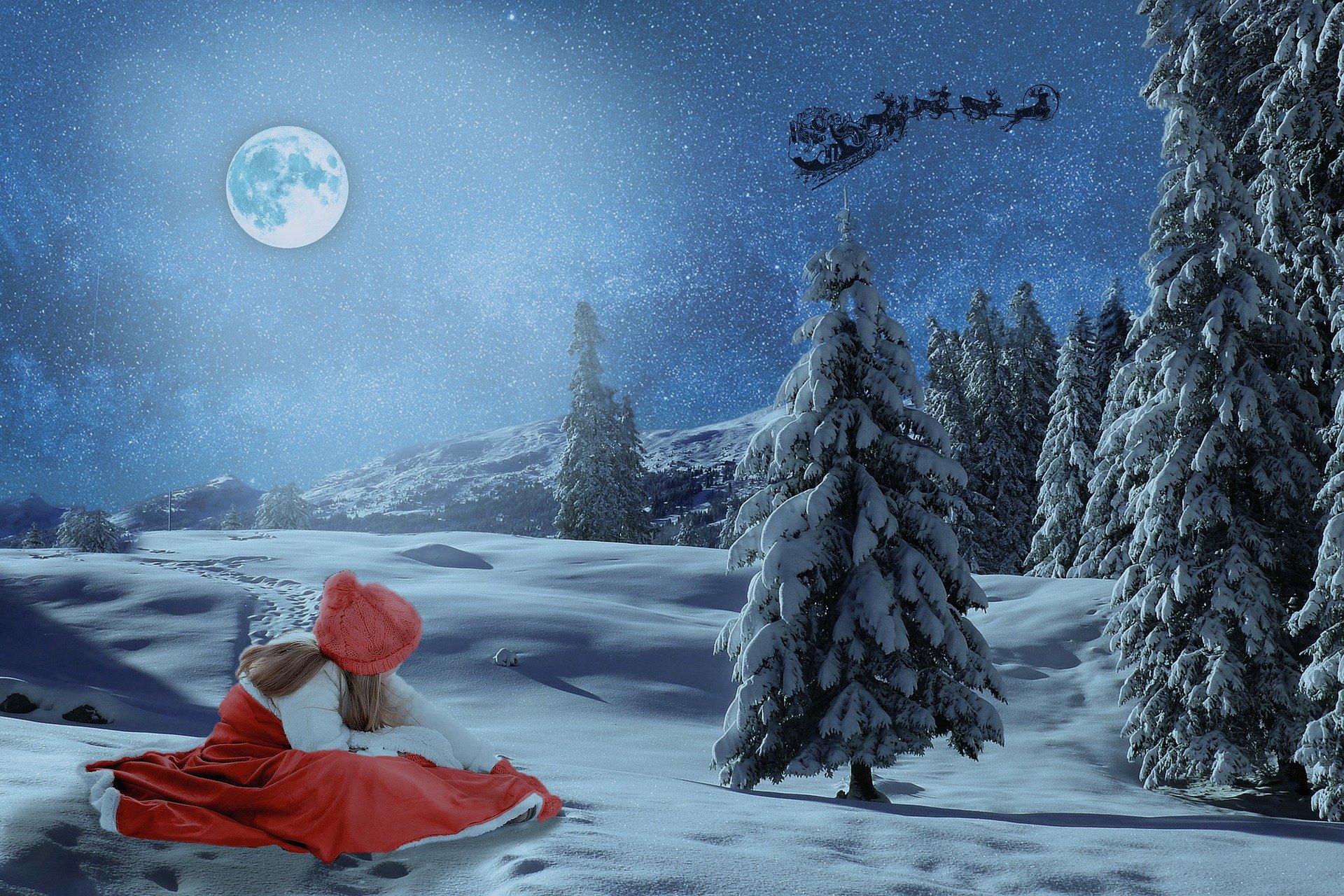 Last year our daughter who was to turn 10 years old on Christmas Eve was questioning the magic of Christmas.  Of course being in Year 5 in primary this is the age where you expect that they start to become non-believers.  The word around the classroom is all about more elaborate presents such as tablets and game consoles being brought by parents and the shift from the excitement of a stocking filled by Santa and the magic of Christmas starts to wain.  With an elder brother who is like Buddy the elf, whether he believed or not wasn’t a problem as his Christmas spirit was still in abundance.  And with two smaller children in the house and two Christmas daft adults we were all in the spirit except one.    Daisy seemed slightly grouchy about it all.  Questioning the magic is of course normal and so she seemed to have several questions to ask, but she just seemed to have a small weight on her otherwise normally happy shoulders.

After moving house a year prior she still missed her old home and old friends, and with questioning one of the most important traditions in a childhood just seemed a bit too much for her and left her feeling a bit fed up.  Without us realising one morning she woke up and wrote a letter to Santa with her thoughts, questions and Christmas wishes.   Unbeknown to us, this was posted in our street post box complete with her sender address and whisked away to Royal Mail. 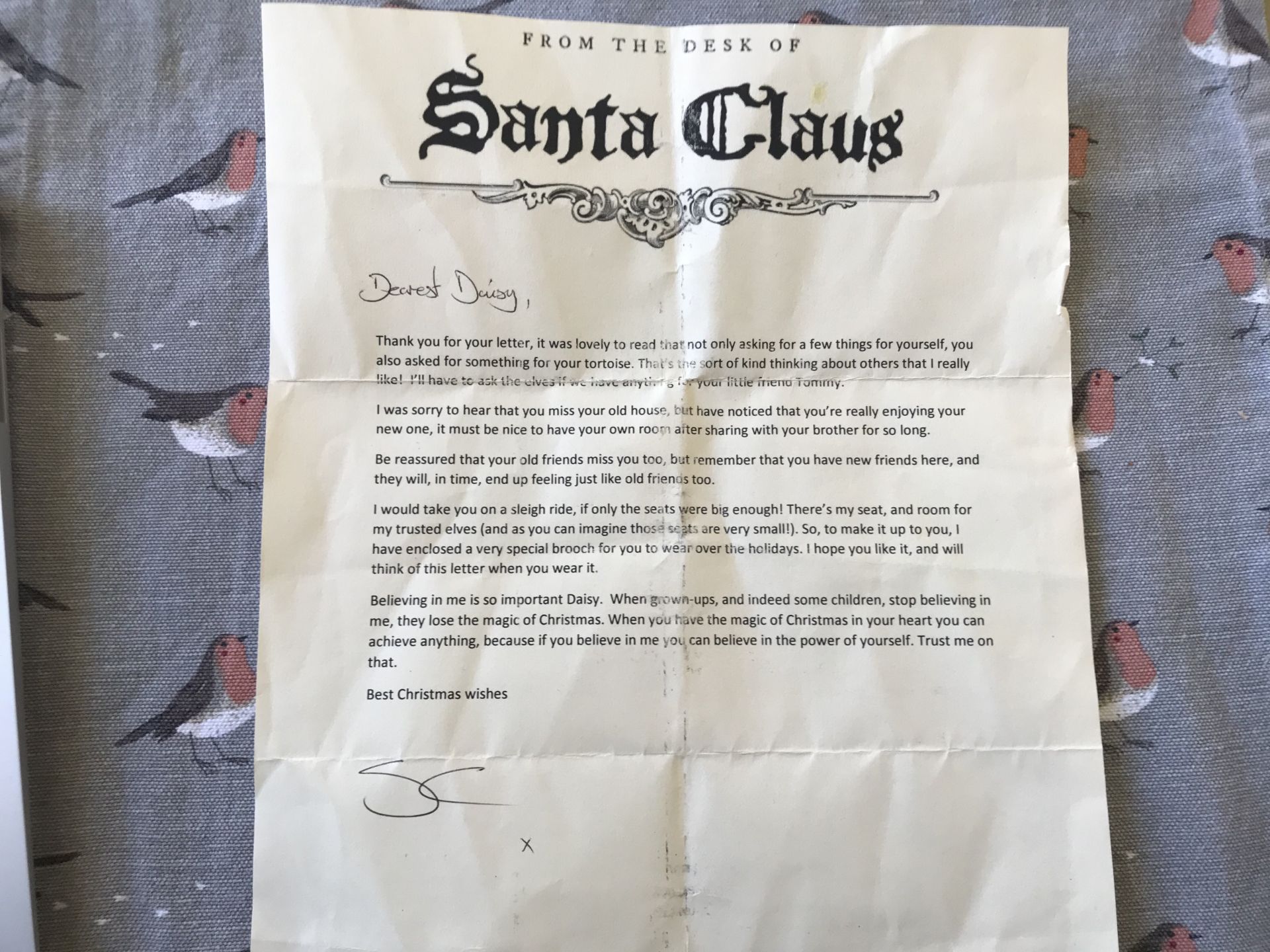 A few days later I was at home whilst Daisy was at school, when a letter arrived through our post box.  I hesitated at first not sure who the letter was intended for and then made the decision to check the contents.  Inside the envelope was the secret letter that had been sent off a few days prior.  It was an emotional little read for both me and my husband.  What shone through from Daisy was that despite what some of her friends were saying, she really really wanted to still believe.  We corrected the envelope and sent it properly this time so the North Pole could give their official take on it.

A few days after we had seen the letter, Daisy came to us and said she had written Santa a letter, of which she had asked him an important question and that she would know more about the magic of Christmas on Christmas Day once he had visited.  We didn’t say much and remained quiet, after all the letter was safely on it’s way.

On Christmas morning the house was full of excitement and as we all sat on the bed together, watching the children one by one open a present from their stocking. Daisy pulled out an official looking envelope.  Puzzled and looking very serious she opened it and was silent for a few minutes. 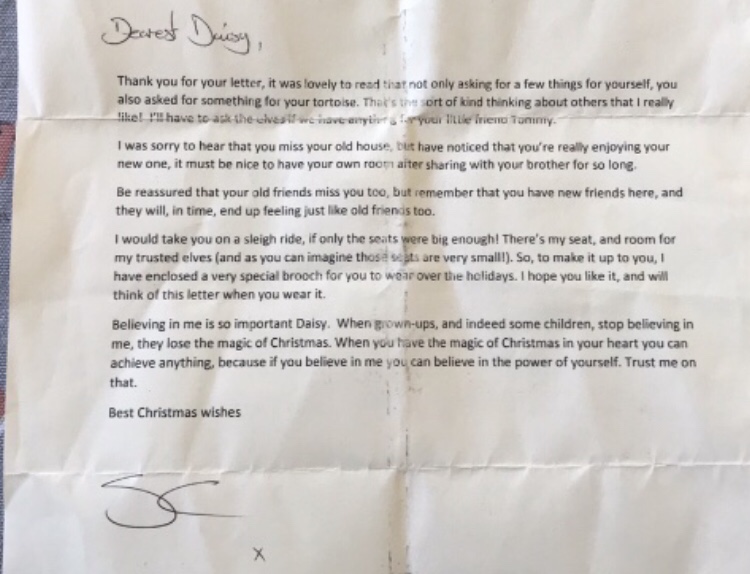 Inside the letter was a beautiful shiny, colourful, gold sleigh brocch.  The smile on her face was apparent that her Christmas spirit was well and truly back.  She passed us the letter and said he has answered my question.  The letter and beautiful brooch were passed around our bed for all to see.    We all agreed that she was very lucky to have such a thoughtful response.  This year, Daisy a year older approaching 11 is much happier to believe in the magic and spirit of Santa and Christmas, she still talks of her official North Pole letter.  You see Santa to us is all about traditions, believing in making others happy and thinking of others.  Daisy has a desk and drawers in her room and has set up what can only be described as a little corner of the North Pole where she spends her time after school making crafts and gifts for all that she knows.  She really really understands the true magic of Christmas.

My Toddler has Separation Anxiety at 2…

5 responses to “The Spirit of Santa – The girl who didn’t know whether to believe….!”