We were kindly asked by Costcutter Supermarket Groups to visit our local Costcutter Store in Harrogate to see their current Festival of Summer promotions.  This promotion is running from the 19th June to 9th July with plenty of savings to be had on food and non food items across the store.  With plenty of household brands included in the offers and a number of  £1 deals and better than half-price deals, you can really make some great savings.

The Summer promotion on meat packs, burger buns, sauces, crisps, confectionary, ice cream, soft drinks, and alcoholic drinks are perfectly timed for Summer BBQs and picnics.  We chose to purchase ingredients in the encore deal from the Festival of Summer promotion, which consists of strawberries, cream and meringues. To further celebrate the Festival of Summer promotion, Costcutter are running an exciting competition in store called Find the Golden Microphone.  So look out at your local store to see if you can spot the golden mic for a chance to win a holiday voucher, as there are up to 20k worth of prizes to be won across the UK stores.

After picking up my ingredients from our local Costcutter store we chose to make a Kids Eton Mess.  We picked this as it’s such a classic British Summer Dessert.  I thought it would be a lovely treat for the children after a busy sports day at school.  It’s such a simple dessert; I knew we could prepare it quickly after school and so I enlisted the assistance of my handy little helpers.  I had Teddy chopping strawberries and Daisy whipping up the cream, crushing meringues and then adding in some sprinkles at the end.  It was good fun to make with the kids and even better when we got to taste it. 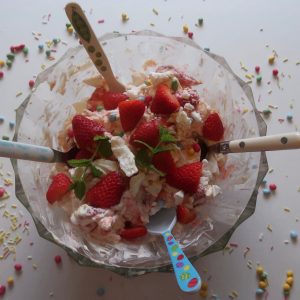 What my 1 year old Eats in…