We’re on a roll with our fudge making in the last week. After making Chocolate crunchie honeycomb fudge we set about trying our hand at a Terry’s chocolate orange slow cooker fudge recipe. It’s a much smoother fudge than the crumblier, rugged Crunchie fudge. The orange oil is a perfect addition to the chocolate fudge recipe and it got the thumbs up from everyone!

I like to involve the children in fudge making so this time Daisy set about helping me. As you have to stir it every 10-15 minutes it’s helpful to set a timer and have a willing child to give it a stir whilst your busy! As I always cook it on a low setting the slow cooker / crockpot doesn’t get too hot. Obviously younger children would need supervision.

Break up the chocolate, we prefer a mix of dark and milk chocolate and use 450g of Dr Oetkers cooks chocolate.

Then pour in a can of sweetened condensed milk.

Add into the mixture a 1/4 tsp of salt, (optional) we feel it always adds to the flavour and a large knob of butter.

Stir every 10-15 minutes with the slow cooker lid off and do this for 2 hours.

Line an 8 inch baking tray and poor the mixture in and smooth it down with a spatula or knife.

After it has cooled slightly for 10 minutes- press the Terry’s Chocolate orange segments onto the mixture and put straight into the fridge to cool.

I found that this fudge mixture took longer than the usual 2 hours to set. We left ours overnight and it was the perfect consistency to cut. I’m sure after a few more hours it would have been also fine to cut. 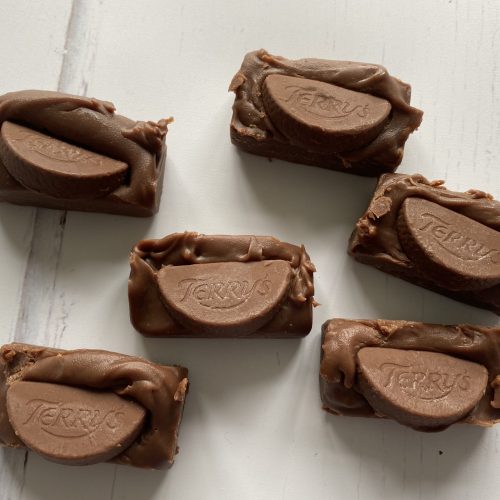 This Terry’s Chocolate orange fudge recipe is one for the whole family to enjoy. You could use any chocolate orange to decorate the top with if you can’t get hold of Terrys’ chocolate orange mini segments. We will be giving this fudge to Dougie on Father’s day and hope that he shares with us!

If you enjoyed making this fudge recipe we also have 3 simple slow cooker fudge recipes here.

What to do with Conkers for Kids…